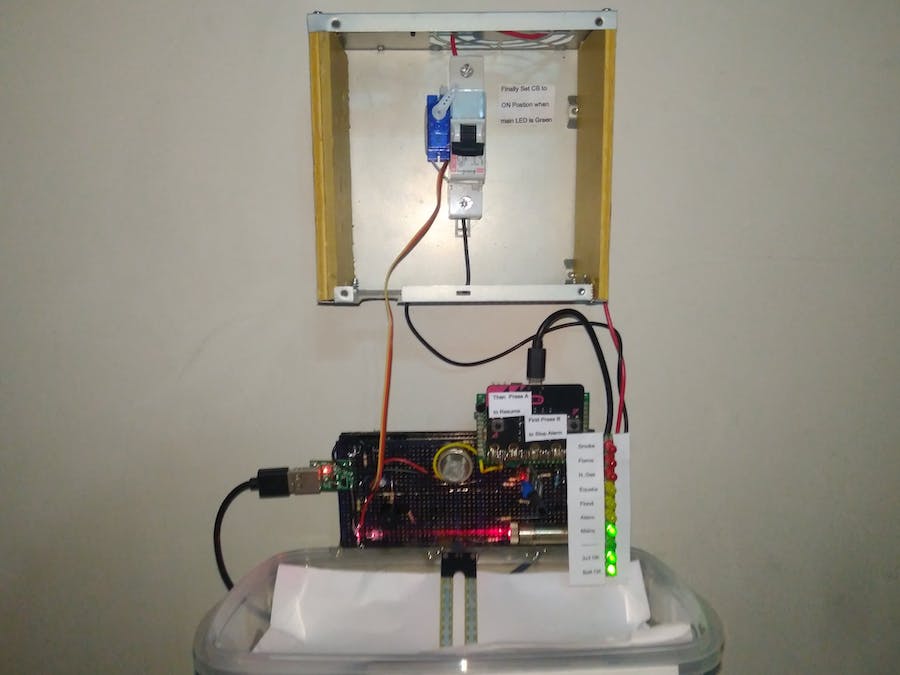 A smart circuit breaker will not only function as a regular MCB but also isolates incoming AC mains supply during disaster by sensing earthquake, fire/smoke, gas leakage or flood water. By disconnecting incoming power lines to equipment and power outlets inside house/office/industry during any disaster, it can reduce the chance of electrical hazard and ensuring safety of peoples life and assets.

This system is programmed with Ada,where safety and security is critical.

Hardware and Theory of Operation

Following parts are connected together to assemble the hardware according to the schematic below :-

*** Note: Relay not used but can be used instead of MCB

All the GPIO, ADC, I2C pins are utilized as follows:-

Here is the schematic for Smart Circuit Breaker hardware prototype :-

Device operates according to following flowchart :

On a piece of protoboard the battery and charger modules are connected and secured with double sided tape and hot glue. This is the bottom layer circuit for powering the rest of the components. Header pins are soldered to carry power to the next layer

On the second layer (i.e the top one), rest of the sensors, modules and microbit is connected according to the schematic.

Servo motor is tied with regular circuit breaker with cable tie and connected to the top layer board to get power from the battery & control signal from Micro:bit.

Install all of these in the same directory/folder.

Where to start: GNAT Programming Studio

Open one of the examples (i.e. digital_out.gpr) for Microbit according to following steps and edit example project code as needed.

Following files are the most important files when working with GNAT Studio: -

.gpr file is the GNAT project file for a project

.ads files is where the definitions and declarations goes

Code snippets below are taken from the attached code of this project to briefly explain essential Ada programming styles :-

Comments/ non executable lines in Ada starts with " -- " like this: -

Anything after -- in a single line is a comment, whereas regular syntax ends with semicolon (;)

Including Packages in Ada

For example: "with MicroBit.IOs" includes microbit GPIO control support to main.adb code. But including "use MicroBit.IOs" will enable to use variable types from MicroBit.IOs package (see below: Variables in Ada for detailed explanation)

Variables are declared in Ada in following format

Connected is a variable name, which is Boolean Type, it's initial Value is True.

Fault_Flag is a variable name, which is Integer Type and it's initial Value is 0

Variable types are 'strict' in Ada.

For example: ADCVal is not 'Integer' type but 'MicroBit.IOs.Analog_Value' type, although it will hold integer numbers between 0 to 1023

Similarly, RedLED1_Smoke has a constant value of 13, but it is not 'Integer' type constant, it is actually 'MicroBit.IOs.Pin_Id' type constant.

To use these odd types of variable like : MicroBit.IOs.Analog_Value and MicroBit.IOs.Pin_Id. coder must include the 'use MicroBit.IOs; ' line of code before variable declaration.

'use' keyword allows programmer to use package specific types of variable.

Here is the ada code skeleton with comments showing what goes where :-

; (semicolon) is the end of a loop or procedure. There are no use for curly-braces {}

In Ada, if-else starts with 'if' keyword followed by logical condition and 'then' keyword, next is the code which will execute if the condition is true, otherwise the code below 'else' will execute. The 'if' statement ends with 'end if;' keyword

For Loop in Ada

Case and null in Ada

Case in Ada starts with 'case' keyword, followed by a variable which will be checked and 'is' keywords. Then it checks matching with 'when' keyword followed by different possible values of the variable and ends with '=>' operator. Next is the code which executes when variable check match with a possible value. 'when other' keyword is for no match condition. Case ends with 'end case;' keyword

'null;' is for doing nothing when no match is found, which needs to be explicitly mentioned.

Nothing is left for guess work in Ada !!!

To use these Microbit specific APIs, following packages must be included first:

Once the editing of the code is done, connect Microbit to computer with USB cable ( Windows will make ding-dong sound ).

Then click : Build > Bareboard > Flash to Board > main.adbto flash code to Microbit. The Message window below will show code size and upload percent.

Ada isn't just another programming language. It shines where Safety, Security and Reliability matters. In systems where a hidden firmware/software bug could be fatal, life-threatening or damage of equipment might cause huge economic loss, those are the kind of systems where Ada can make a huge difference.

For example, embedded system used in:-

Ada compiler is very strict, it will keep bashing the coder/programmer with errors, warning, suggestions until a clear, well thought code is produced.

“think first, code later” - is the principle which Ada promotes !

Programmer must think clearly about the impact of each type/variable and code in a proper manner. There are other differences like writing style, operators.

This prototype is designed in a way, so that all the functions can be demonstrated easily. But for practical use, following actions are recommended:

As I have already said, this is just a prototype hardware which I made with my limited resources. But Smart MCB is exactly the kind of application (safety critical) for which the spirit of Ada programming is intended.

MCB was invented and patented by Hugo Stotz almost 100 years ago. I wish someone out there can turn this project into a real product and upgrade the century old MCB technology into Smart MCB for improved safety of next generation electrical distribution systems. 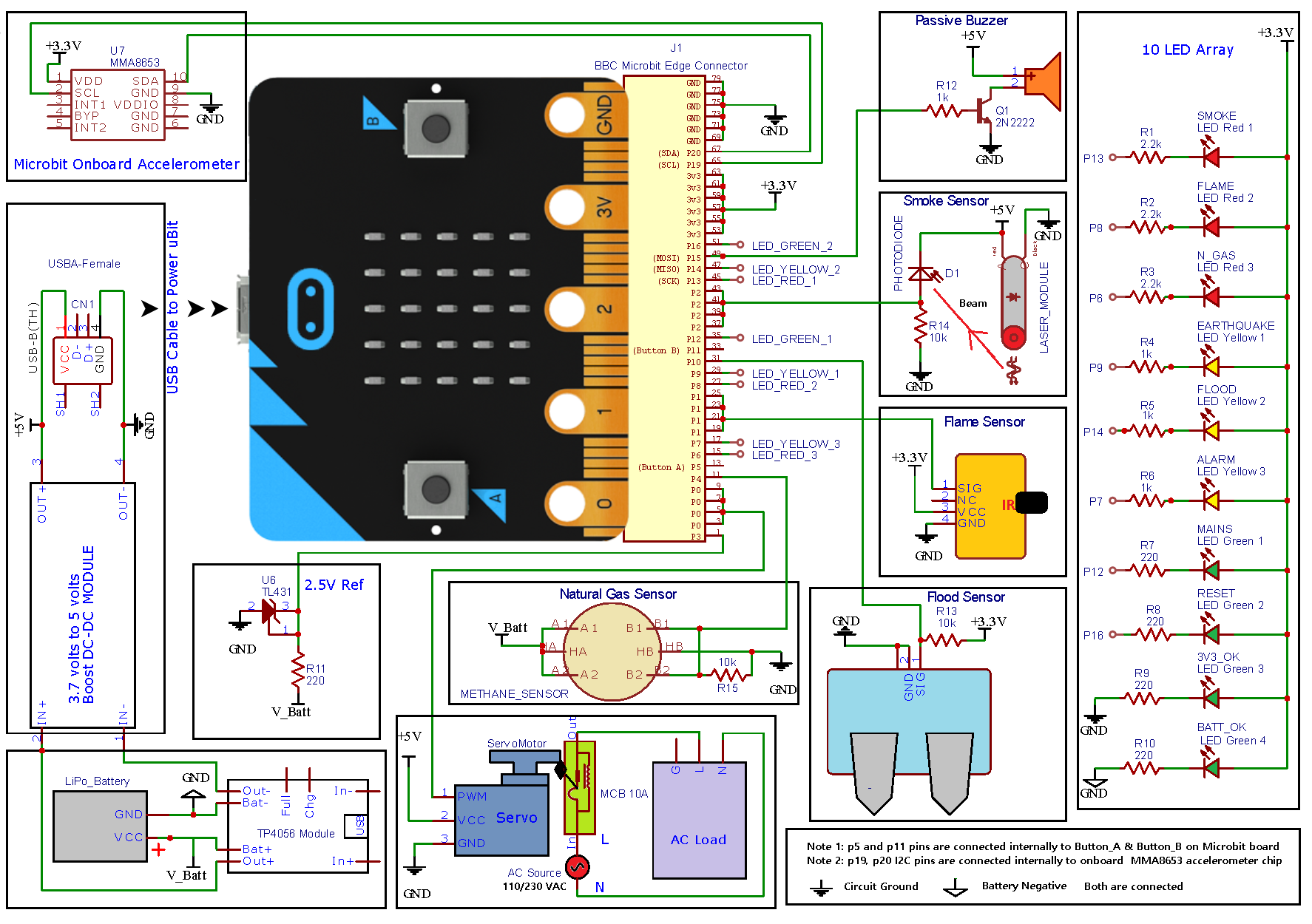 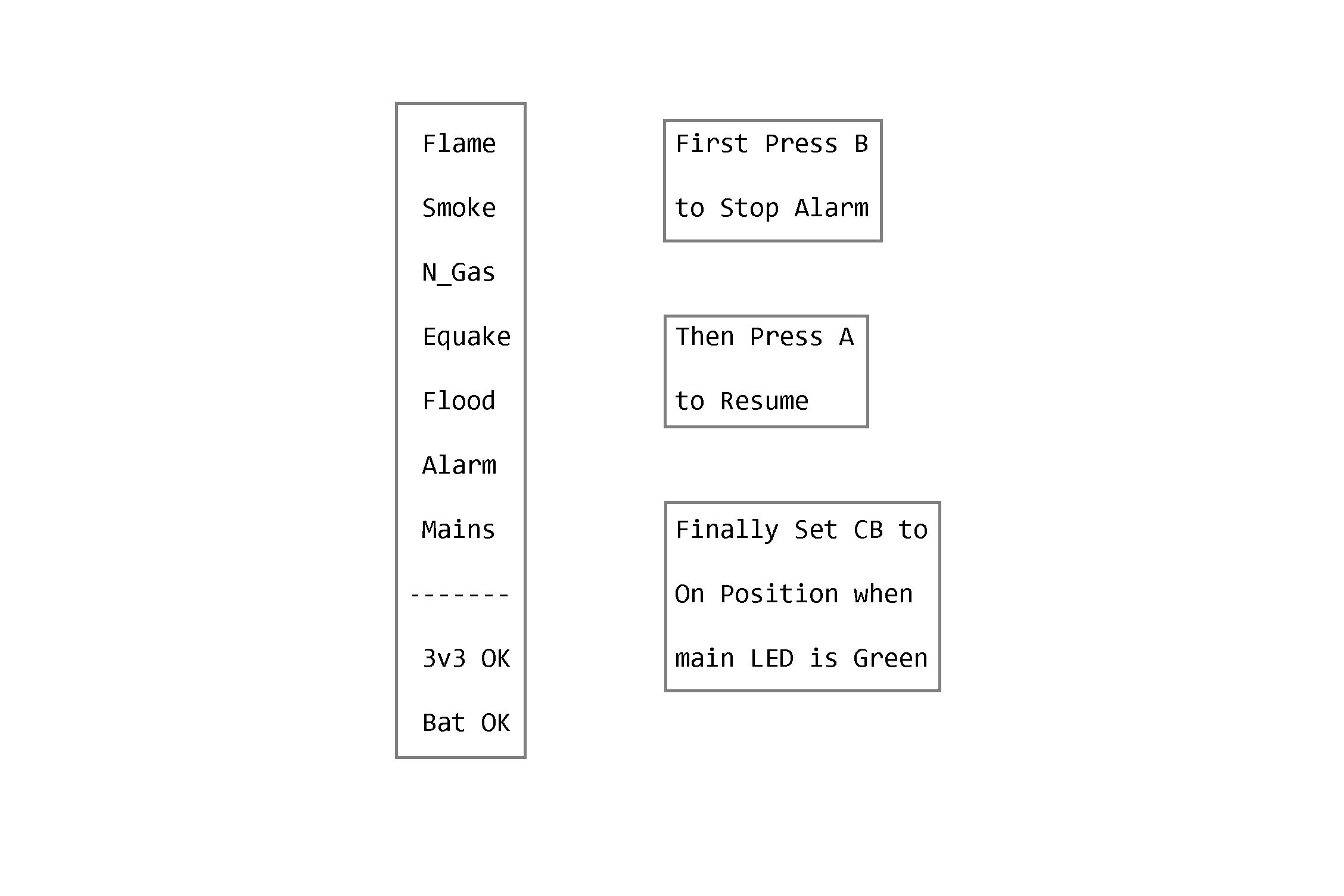 61 projects • 225 followers
"What Kills a 'Great life' is a 'Good Life', which is Living a Life Inside While Loop"
ContactContact
Thanks to Fabien Chouteau.