Capture accelerometer data remotely on a BBC micro:bit, then use the XinaBox Wi-Fi gateway to transfer the data to an IoT platform.

Capture accelerometer data remotely on a BBC micro:bit, then use the XinaBox Wi-Fi gateway to transfer the data to an IoT platform. 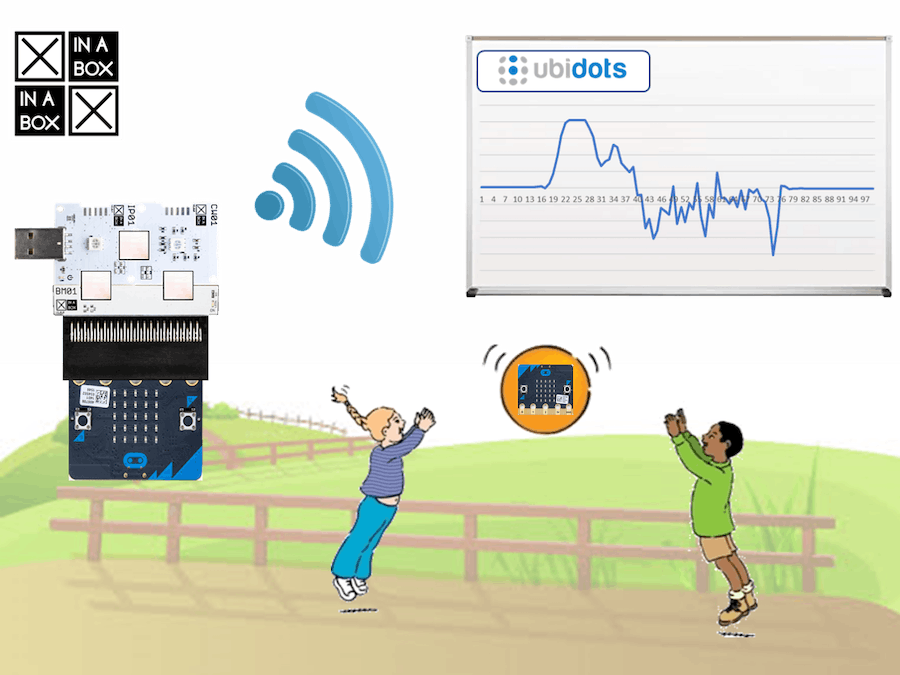 Acceleration is what makes an object change its velocity: when a force of sufficient strength is applied to an object and makes it slow down, speed up or change direction acceleration has occurred. It is a fundamental characteristic of our experience of the world and a core concept in the mental tool box we use to make sense of that world.

Not only is it exhilarating to experience, it is also fascinating and educational to analyse. Being able to visualise the forces associated with dropping or throwing a ball, or an accelerating rocket, or seeing what happens when a moving object hits a wall, provide unique insights into this building block of creation.

The project will show you how to use a micro:bit and IoT to analyse acceleration over a time period. You can use the code and techniques described here to measure the acceleration that applies to any moving object that you can fix a micro:bit to.

Below is an example of a visualistion of acceleration: the chart shows real data from an object moving in a plane. I won't say much more about it right now - I encourage you to look at the acceleration profile and try to infer what is going on (e.g. is it a ball bouncing, or a head rolling, or something else?). The final section of this blog reveals the real world event that is represented below.

One of the great features of the BBC micro:bit is it's onboard accelerometer. Many a young learner has spent loads of productive time reading data from the accelerometer and using it in all sorts of creative ways. I've seen countless RC cars that are controlled by tilting, gloves that act as controllers, some very clever balancing robots and even gesture based musical 'instruments'.

But the accelerometer also has great potential as a learning tool to support the perennial speed / distance / time triangle that is so important, ostensibly in physics but in so many spheres of knowledge. What better way to teach acceleration than by getting young learners to witness an event, then review the forces behind that event?

In this blog I am going to show you how to:

For this example we will throw a ball between 2 people then fling the data onto the Ubidots IoT platform.

The micro:bit includes radio functionality, which can be used to enable a Bluetooth connection between a micro:bit and another device (NOT another micro:bit though).

In some circumstances it is possible to transmit the data as you collect it, using either radio or Bluetooth. This approach did not suit the circumstances that led to this blog though. When I was asked to look at the real world problem that generated the chart at the beginning there were some specific challenges to consider:

So, I've gone with the following workflow:

Any resemblance to Pacman vomiting a micro:bit is accidental, perhaps profoundly so!

Once the ball is built do the following to activate it:

The difference between the Simple and the Advanced versions lies in the data collection technique. For both, 1 reading is saved every 25ms (which amounts to 40 readings per second). For the Simple version we read the accelerometer just once every 25ms, but the Advanced code will read the accelerometer up to 75 times in this 25ms period. We then save a single value that is the average of all 75 readings. This 'smooths' out the data: it reduces outliers and gives a decent approximation of the acceleration across the whole 25ms period. The difference in data quality is marked and I encourage you to check this yourself: try a few times with both versions of the code and look at the data charts. You can read a lot more detail about this method, when to use it and why it is effective here on my blog.

If you look at the code you will notice that I am recording acceleration in the y-plane. For the real world scenario that I developed this code for that was adequate as the micro:bit was moving in that plane. When it comes to throwing the ball, though, the forces acting in the y-plane will be in part determined by the orientation of the micro:bit when you throw it. Consider adapting the code to record x and z readings and also ways that you can throw the ball in such a way that the acceleration acts in plane you are recording.

You may also notice that the code provided takes 120 readings. With 1 reading every 25ms this amounts to 3 seconds of data collection. You can play around with this. I found that it was possible to record up to 400 data points in this way. My production code used a file to store the data, rather than a list. Both ways have their pros and cons, which I won't elaborate on here (but please ask if you are interested).

You will need to do the following:

I'd recommend having a look at this blog, which contains all the info you need to get connected.

Before completing the experiment ensure your gateway is powered up and connected to Ubidots.

Our micro:bit gateway - a micro:bit attached to the XinaBox IoT starter kit

Note that the microPython code in the gateway for this project is almost identical to the code used in the other blogs I've written. Adapting it for each circumstance is relatively easy. When MakeCode blocks are released (soon!) this process will be greatly simplified.

Putting it all together

My code takes about a minute to transmit all the data to the IoT platform. This can be reduced significantly.

The reason it takes so long is that I have been very cautious - I spent some time adjusting the various sleep commands, and when I found a mix that worked consistently I left it at that. I would love to see it working much more quickly, so if you crack this please get in touch and let me know how.

Analysing the chart from the beginning

Lets take another look at the chart from the beginning of the blog. This time I've put some lines in to mark the interesting 'phases':

As the object moves through its run, so it is subject to various forces

Have you guessed what it is yet?

It is a rocket powered car. In Phase 1 the rocket engine fires, then stops firing and we enter Phase 2. This phase sees forces of resistance work strongly against the car. In Phase 3 the car bounces a bit, perhaps sometimes leaving the ground and going briefly into freefall (which might explain the minor acceleration noted in that period, idk?). In Phase 4 it then hits a specially designed breaking system which slows it to dead stop in about 1.5 meters.

13 projects • 10 followers
Hobbyist: some of this I write from scratch, some I work with developers and test / edit. Java + micro:bit are my thing. Work at XinaBox.cc.
ContactContact