Turn mains electricity on and off using a micro:bit with an IX01 breakout and a 3rd party relay.

Turn mains electricity on and off using a micro:bit with an IX01 breakout and a 3rd party relay. 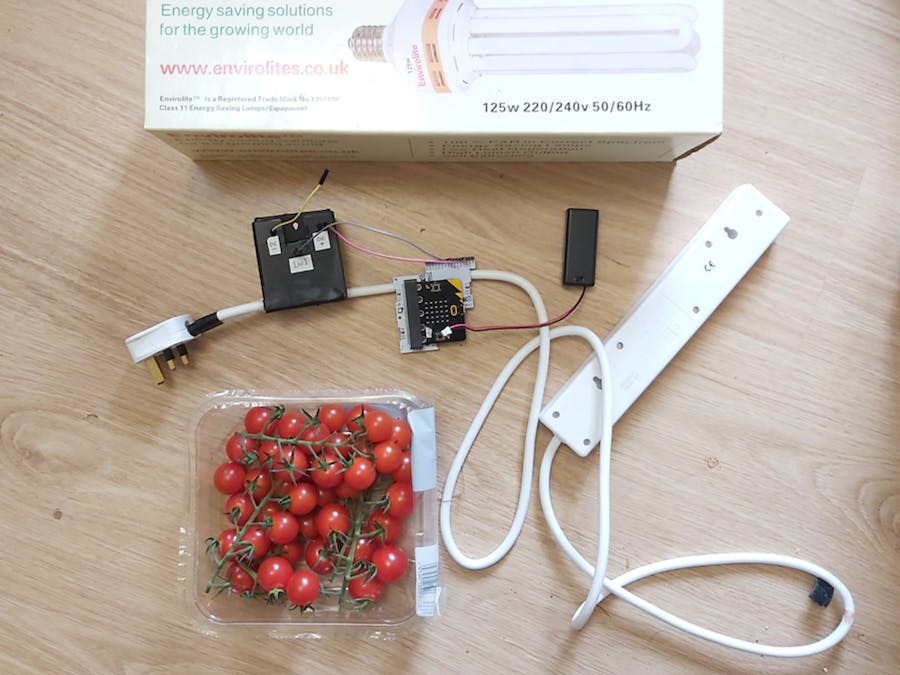 I have begun looking at how to build an automated grow room. There is great demand for this sort of thing, both in the EDTECH world and also in the general population... who doesn't want fresh tomatoes in the middle of winter?

Grow rooms require a strong light: one powered by mains electricity. To automate a grow room I therefore need to control an appliance that is plugged in to mains - I need an on-off switch that I can manage using code.

This project is part 1 of the grow room: it shows how to turn mains power to ANY appliance on and off using a micro:bit and some XinaBox kit. It is key to my grow room project, but it is also a very useful and generic set up that could be used for all sorts of automation projects (some ideas listed at the end). And once you can use a micro:bit to switch the relay on or off, it is a very simple step to add Wi-Fi and control it via IoT, as I will show you in part 2.

I used an extension cable in this project for two reasons:

The wiring and approach used here would work just as well if you connect the relay to the power cable attached to an appliance.

How a relay works, for first timers

FYI this is my first time using a relay. I had help from my oft-times collaborator and friend @KalbeAbbas - KJ... thanks :)

The relay I used is shown below. Yours may be different but the labels should be the same or similar. My relay works with a 3.3V power supply, which allows me to use my BBC micro:bit without needing to add in a 5V power source.

A relay has an electromagnetic switch which is used to turn a power supply ON or OFF. Here's what we will use that for:

The micro:bit will also provide power to the relay: the relay needs 3.3V to power its electromagnetic switch.

Connecting the Extension Cable to the Relay:

I used a cheapo extension cable which I chopped as shown:

To connect the extension cable and the relay I used the following circuit:

As the diagram shows, I need to slice just 1 cable and run it through the relay in the N0 and COM ports. The cable to use is the live one - colour coded brown in the UK.

Goes without saying: exercise GREAT caution when working with mains electricity. The author and Hackster accepts no responsibility for any injury or damage you might cause / incur.

My relay attached to my extension cable

NB: the image above shows the relay connected to the cable: it is NOT SAFE to leave the relay like this and plug the cable into your mains.

NOT SAFE AT ALL.

A housing for this is essential - see the later section titled Safety First.

Connecting the micro:bit to the Relay:

Connect your xChips as shown in the image below (on the left), then slide in your BBC micro:bit:

The xChips can be connected differently, but this configuration is very space efficient

Next get some wires and connect the IX01 to the relay as shown below:

Note - colours used above are arbitrary

Writing Code to Control it

With everything wired up, all that remains is to write some code for the micro:bit that will prompt the relay to turn ON and OFF.

We will implement this using button clicks:

The code below is all we need:

The ShowString blocks can be omitted but are useful

Using mains electricity is no joke - you need to take real precautions.

What I did was build an enclosure for the relay that makes it impossible to touch any live wires. I used an old business card box, because I had one lying around and it was a good size. Old boxes, polymorph, folding cardboard, 3D printing - there are loads of ways to build a housing for the relay, and you should do so before running power through it. Here's some pics of my housing:

Everything tucks away neatly in the housing

You will notice that I put 3 wires outside the box. These wires connect to the DC terminals ("DC-", "DC+" and "LN1") of the relay and allow me to connect the micro:bit + IX01 without having to get anywhere near to the relay.

Be cautious when testing.

Make sure the code is loaded on your micro:bit and that everything is plugged in properly. Power up and run the micro:bit, then push A and B buttons to test the setup. When you press A the extension cord should turn 'ON' and any appliances attached will begin to draw power.

This setup allows me to turn on a grow light using the buttons on the micro:bit. But I might just as well use the on / off switch in the socket on the wall!

What I have actually achieved here is the ability to turn the light on and off in CODE. It is relatively trivial now to upgrade the switching method:

I am also going to look at whether I can control each socket in the extension cable separately - turn each on and off individually from code. If there is a simple solution I will write that up.

I have a completely separate use case for the same setup that I might consider implementing when lockdown is over: I use a Blink home security system, which includes cameras that turn on when motion is detected in my house - I can watch the cameras in real time over the Internet. It has occurred to me that having to watch burglars defile my home would be quite frustrating. With this setup (and the IoT enabled switch) I could go all Home Alone on them, turning appliances, and maybe the odd death trap, on and off while watching and recording their terror!

Thanks for reading and please look out for Part 2 :)

This project is meant to be easy to read and relatively simple to implement. It shows you how to achieve a useful outcome without labouring on irrelevant technical details. If you like this style please check out my book: Beginning Data Science, IoT and AI Using Single Board Computers.

17 projects • 13 followers
Hobbyist: some of this I write from scratch, some I work with developers and test / edit. Java + micro:bit are my thing. Work at XinaBox.cc.
ContactContact
Thanks to KalbeAbbas.