How to easily employ AI image/sound recognition for your microcontrollers, even if you know nothing about machine learning.

Use Teachable Machine AI to Control Anything

Use Teachable Machine AI to Control Anything

How to easily employ AI image/sound recognition for your microcontrollers, even if you know nothing about machine learning. 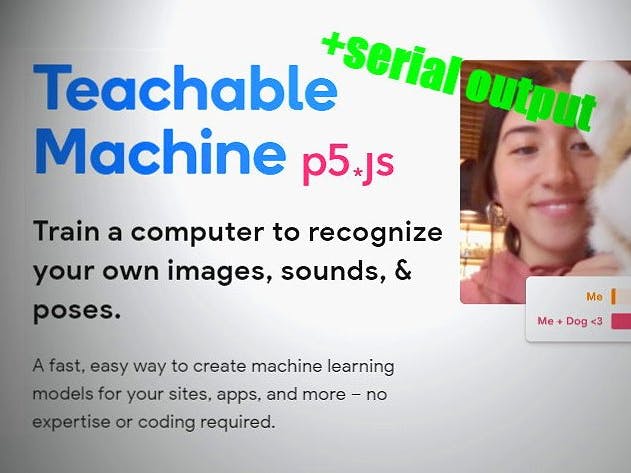 Teachable Machine is a web-based AI tool developed by Google, which enables you to train and use AI models without any AI knowledge. An AI tool for dummies. Neat, right?

But can it do more than simply demonstrating machine learning in the web browser? Can it be a practical tool too?

Interestingly, there's a demo on the Teachable Machine website called Tiny Sorter which use p5.js (an online JavaScript editor/compiler) to talk to an Arduino Leonardo with a servo. So it is entirely possible to run AI on your computer and do something useful.

This tutorial is about how to make Teachable Machine AI output its recognition results to an external device, such as a microcontroller. My method is not the same as the Tiny Sorter demo, however the principle is similar. This would be especially useful for people who has little knowledge about AI, but interested to use it for their Maker or physical computing projects.

(Note: the following steps only tested on Windows 10.)

Pros of this method:

Cons of this method:

When you train your model, I would use Class 0 as the background image (nothing), then the things to be recognized would be named as "1", "2", "3"...etc. This will be easier for the devices to read results.

For image recognition, you can move your object around to improve AI accuracy, and there should be enough difference between each objects.

Or if you are training the sound recognition model, make sure to input enough background noise samples first. Same as above, I would name the sounds to recognized as "1", "2", "3"...

After the model finished training, click Export Model than select Tensorflow.js -> Upload. Copy the model link after it is done. (For now sound recognition can only choose Tensorflow.js.)

The p5.js scripts template can be found here:

Or you can find the complete code here. I haven't done the gesture recognition version, but it should be easy to modify.

This script is basically the combination of Teachable Machine's and p5.js's example code. There are 4 files total:

You can login p5.js and duplicate/save your script. You'll only need to change two places:

Your device (in this case, a BBC micro:bit) will need its own program to be able to read serial inputs and do something about it.

The serial outputs are strings or characters and have no new line characters (like \r\n).

The following example is to indicate received image recognition results by lighting up different LEDs on my BBC micro:bit:

Download and unzip p5.js serial control program. Connect your device to USB and run the p5.serialcontrol.exe (for Windows). You may have to set it allowed to run in your antivirus program.

Once the program launched, open the serial port of your device. If you are not sure, open Device Manager to see which COM port it has.

Remember to close the port after you are done or when you need to program the board.

After the serial port is connected, everything would be good to go.

Step 5: Employ the power of AI!

Go back to the p5.js script editor and click Run. After a short while a webcam window should appear beside the script. You may see your device's serial port light blinking, indicating the data it received.

If you forget to open the serial port, nothing wrong will happen. The p5.js script would simply run as usual.

In the demo below I can indeed send image recognition results to my micro:bit:

Another demo here is using an Arduino Nano and a mini servo to indicate the sound recognition results: (The background noise is not a result. A result would only be returned when the model recognized something.)

I added a small delay at the end, for the servo needs some time to finish its turn.

It is possible to control something not directly connected to your computer. One possible way is to use HC-05 Bluetooth module on the microcontroller as a wireless serial port.

If you are using micro:bit, you can use one to simply resend results to others via the "radio" function.