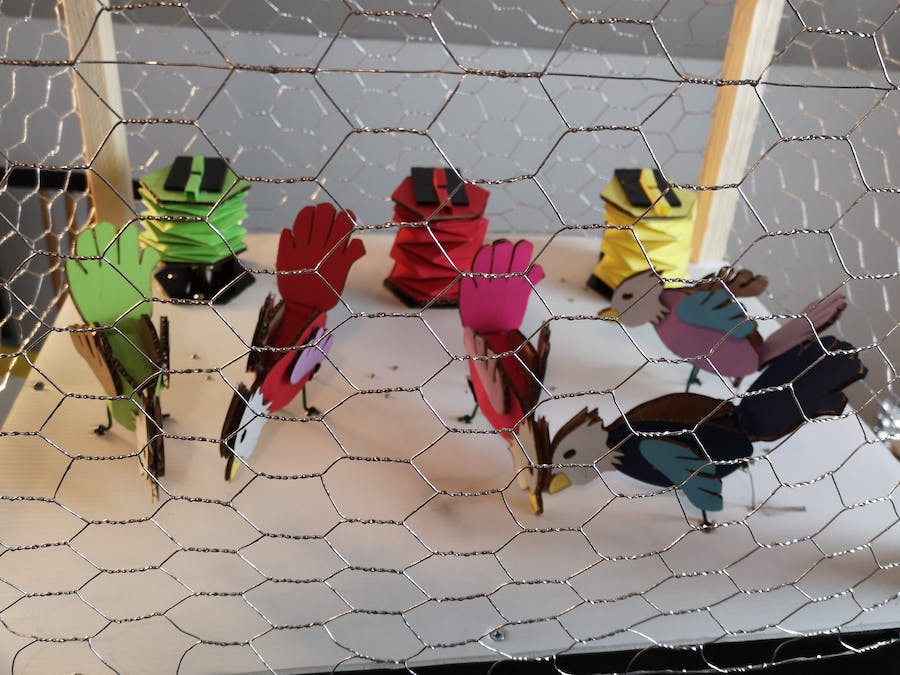 Birds is built with a simple electronic to create a nice scenery effect. To build the project I have followed two separate workflows: the building of the birds’ cage and the animatronics of the birds themselves, including electronics with micro:bit.

The inside of the cage - not visible - includes the moving parts laser-cut while the cage emulates a traditional chicken cage with a cardboard base (a black painted recycled box); the base of the cage is the container of the electronics and the moving engines.

The support structure of the cage is built with 2×3 cm wooden splines joined on the top side by two M2 threaded bars to give robustness to the entire structure. Around the cage, I have fixed a chicken grid that gives good visibility to the interior with a touch of realism.

The electronic assembly (no soldering is required) is based on the BBC micro:bit board and the All-in-one motor and servo controller by Kitronik (kitronik.co.uk), a board that can manage up to eight servos and four DC motors. For this project, I have used all the servo controllers available.

The laser cut parts can be done manually without difficulty with a couple of cutters, a scissor, and plywood saw but the precision of the laser makes the difference.

The moving components are of two types; the birds, moved by five micro servos and the twitters, moved by continuous servos – very similar to a geared DC motor. The birds' motion is simple, through a 2 mm thick wire transmission. Using a software delay and a different starting position every one of the five subjects moves in a quite different way.

The creation of the twitters has been inspired by Rob Ives, a genial maker from the U.K. that creates ingenious paper mechanisms. I was searching by a lot of time a way to reproduce that choo-choo sound used in wall mount clocks very popular during the '60s and ‘70s decades. Finally, I met his site showcasing just what I was searching, easy to build from a single sheet of paper. First I made one of his models and it worked, then I studied the way to hack the design (released under a free Creative Commons license) adapting it to my needs. I made a set of three different tweeters moved by the continuous servos with a rotating cam mechanism.

The complete Birds cage is one of the interactive machines shown at the Art-a-Tronic exhibition in Gent, from April, 5 until May 31.