Part two of how to make an awesome, easy companion robot.

Part two of how to make an awesome, easy companion robot. 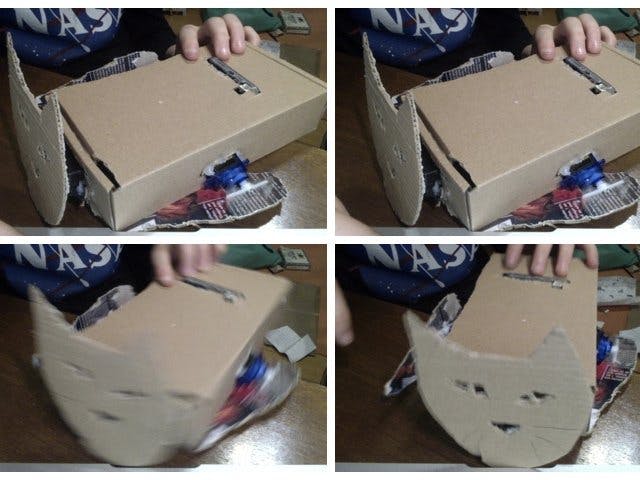 First things first, GO READ PART 1 IF YOU HAVEN'T. You'll need everything set up from part 1 to continue to part 2.

Ok. Let's get started. First, plug the Crickit into its power pack.

Great! Then, put the "robot" micro:bit into the Crickit.

Now plug in your servos to the Crickit like this in the little spot that says "Servo" on it.

1 / 4 • The servos. The big one will be for the head and the little ones will be the arms.

Tada! Now, go back to the project that you started on Microsoft MakeCode (the one with the Crickit extension in it), go up to the top of the page, and do this;

Convert the blocks to Python!

Now you have converted the blocks to python! Congratulations! It should look like this:

You can delete the code that's already there. Then copy-paste the code in this project titled "Gandalf Receiver."

Now it should look like the above. Click the "Home" button on the top left corner and then create a new project.

Now convert your new project to Python like before, except this time, copy-paste the "Gandalf Controller" code into it.

Now, you are COMPLETELY DONE with editing the code. First, link up the micro-USB to USB cable again (if you haven't already) and connect the micro-USB end to your controller micro:bit (a.k.a. not the one on the Crickit)

Then go back to your controller code and press the big purple "Download" button.

The below will pop up:

This is my .hex file and MICROBIT drive

Now your physical micro:bit should blink a yellow light a few times. Wait until it has stopped blinking and then pull the micro-USB out from it. Lay your controller micro:bit to the side and then repeat the process on the other micro:bit; this time using the receiver code.

Yay! The main functions of your robot are working! Now to make it look good;

Next you will want to cut holes in the sides of the box for you to put the servos through. Glue them into place so they don't fall out.

You will have to glue the head and legs of your robot onto their corresponding servos. I used hot glue; it was a little messy (and somewhat ugly), but it worked. Try to do this after the servos are secure, just so nothing turns out too finicky.

Now test out your robot. If you press the A button on the controller micro:bit, one of the servos should turn one way. Press B and the other one will turn another way. This will look like the bot is moving it's arms. If you press both buttons the head will turn and give you a puppy stare. 🥺

Gandalf in all his glory!

Congratulations! You have just made yourself an R/C companion bot!

Uses for the bot

If none of the servos turn

Check to make sure that the Crickit is on. There's a little switch next to the power plug, and when it's on, there will be a green light that turns on next to it.

Your servos could also be plugged in backwards, so check to make sure that the little gold parts are facing in the direction of the little green light and power plug.

If the servo turns the wrong way

The code is probably fine. Just un-attach it from the robot's chassis and flip the servo upside down. Most likely you just mounted it the wrong way.

Other Things of Note

A thing to mention: this project is pretty just the rugged outline of a R/C companion bot. If you want to add things to make it look better (i.e. faux fur or 3-D printed appendages) please feel free. I purposefully designed this so you could build on it.

If you repurpose the original design of this for something, I'm fine with it, just please give credit and ask first.