Build a simple remote control car with Micro:bit for kids.

Build a simple remote control car with Micro:bit for kids. 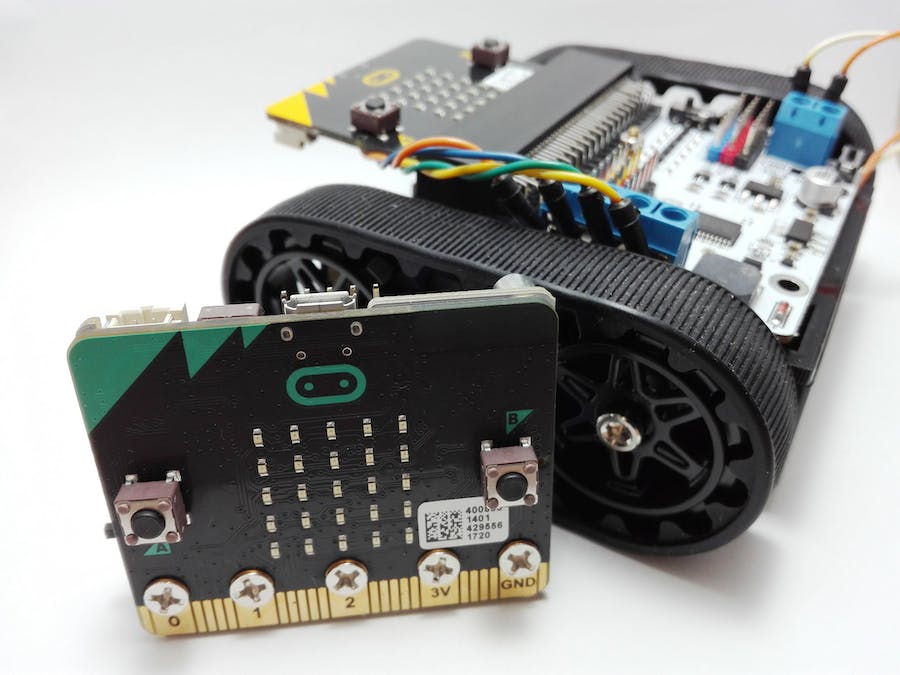 The Micro:bit is an ARM-based embedded system designed by the BBC for use in computer education in the UK, But it is currently available in other countries of the world.

The board is 4 cm × 5 cm and has an ARM Cortex-M0 processor, accelerometer and magnetometer sensors, Bluetooth and USB connectivity, a display consisting of 25 LEDs, two programmable buttons, and can be powered by either USB or an external battery pack. The device inputs and outputs are through five ring connectors that are part of the 23-pin edge connector.

The Micro:bit was designed to encourage children to get actively involved in writing software for computers and building new things, rather than being consumers of media.

In this tutorial, we'll build a simple remote control car (without programming knowledge) with Micro:bit for kids. At the end of this tutorial, our robot will be as follows.

To connect the motors to the Micro:bit, it requires an interface, In this tutorial, we use Elecfreaks Motor:bit.

The Motor:bit has integrated a motor drive chip TB6612, which can drive two DC motors with 1.2A max single channel current. Motor:bit has integrated Octopus series' sensor connectors. You can plug various sensors into it directly. Among these connectors, P0, P3-P7, P9-P10 support sensors with 3.3V power voltage only; P13-P16, P19-P20 support 3.3V or 5V sensors. You can change electric level by sliding the switch on the board.

For convenience, we used a Pololu Zumo Chassis that is made by Pololu. Read the assembly instructions.

After assembling the chassis, the motors' wires need to be connected to the Motor:bit board. Two motor input connectors in total. M1+, M1- and M2+, M2- separately controls a channel of DC motor.

Do this according to the below pictures. If later uploading codes on Micro:bit, was wrong for rotation of motors, you can easily change the wires of each motor.

At the end it is needed, connect the battery wires to the Motor:bit board. I used two lithium batteries, which provides more power (About 8 volts).

You can control the car in two ways:

In this way, you need to install the micro:bit blue application on the android phone.

Now, you need to pair the phone and the Micro:bit, then control the car through the mobile application.

Example #2: Control via another Micro:bit

This method requires another micro:bit as controller. With the help of Elecfreaks Power:bit, the micro-bit will turn into portable mode and you can easily get it everywhere. It is powered by two 2025 or 2032 button batteries and carries a buzzer on the board. Screw it to the micro:bit and enjoy it!

For the controller, the following code must be uploaded to the micro:bit as sender.

I suggest watching the below video: