Learn how to use the photoresistor (RP) of Snap Circuits as a light sensor input for the micro:bit.

Learn how to use the photoresistor (RP) of Snap Circuits as a light sensor input for the micro:bit. 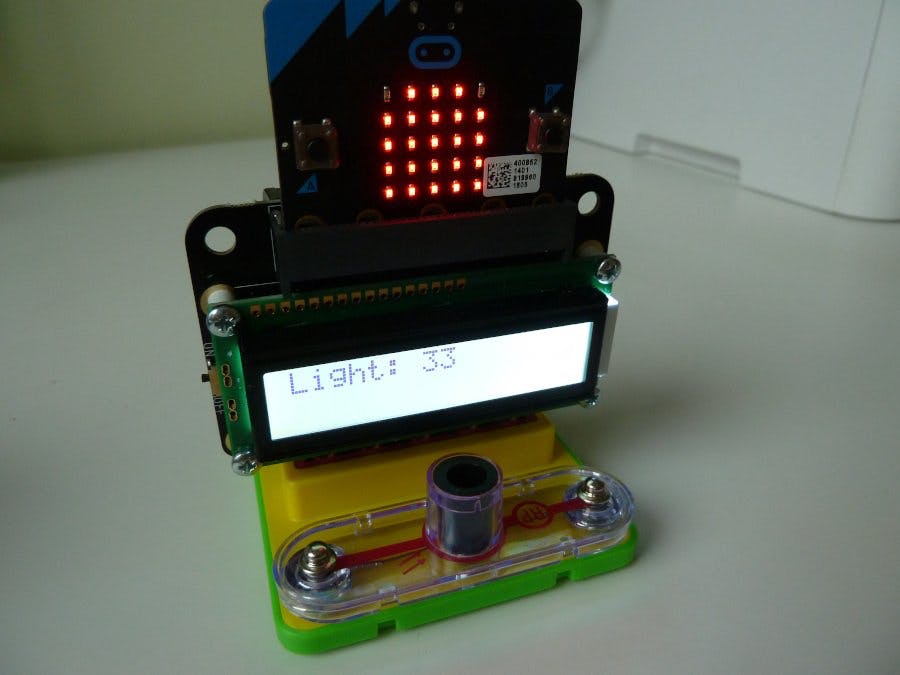 The BBC micro:bit can estimate the amount of ambient light through the LEDs on its matrix display, but this method is not very accurate. The Snap Circuits comes with a photoresistor component that does this job much better.

This project demonstrates how to connect the Photoresistor (RP) of Snap Circuits to the micro:bit and use it as a light sensor.

We will indicate the amount of ambient light on the micro:bit LED display by plotting a vertical graph.

If you have the optional Kitronik :VIEW text32 LCD Screen, we will display the actual value of the analog input that the micro:bit reads from the photoresistor.

The photoresistor (RP) is a special resistor that can be used as a light sensor. Its resistance value changes from nearly infinite in total darkness to about 1 kΩ when bright light shines directly on it.

When you close the slide switch (S1), the Battery Holder (B1) powers the snap:bit through the 3V snap and the micro:bit turns on. The "forever" loop starts, reads the analog input from pin P1 and sets the value to the "light" variable.

It is important that we pass the value of max(0, 200-light) to the block because we want to display the inverted value of reading. For example:

Then the "show string" block updates the Kitronik :VIEW text32 LCD Screen (if available) to display the text "Light: <light>" on the top row of the screen.

Finally, we set a small pause to avoid constantly updating the LED and LCD screens.

This process repeats endlessly in the "forever" loop. The vertical bar on the LED display and the text on the LCD screen are adjusted in real-time as the light shining on the photoresistor changes.

If you run this project during the day, there should be a lot of light shining on the photoresistor. Its resistance value would be low and the micro:bit would read a value closer to "0" from pin P1.

Can you go to a darker place? Check how the micro:bit will detect the change in the ambient light.

Just like some other Snap Circuits components, you can connect the Photoresistor (RP) directly across the 1 and GND snaps on top of the snap:bit without any additional wires.

This minimal setup is very useful when experimenting with the code and the micro:bit is connected to the computer. Or when you have the Kitronik :VIEW text32 LCD Screen connected like we had on the cover photo of this project. In this case, the batteries of the LCD screen power the micro:bit too. 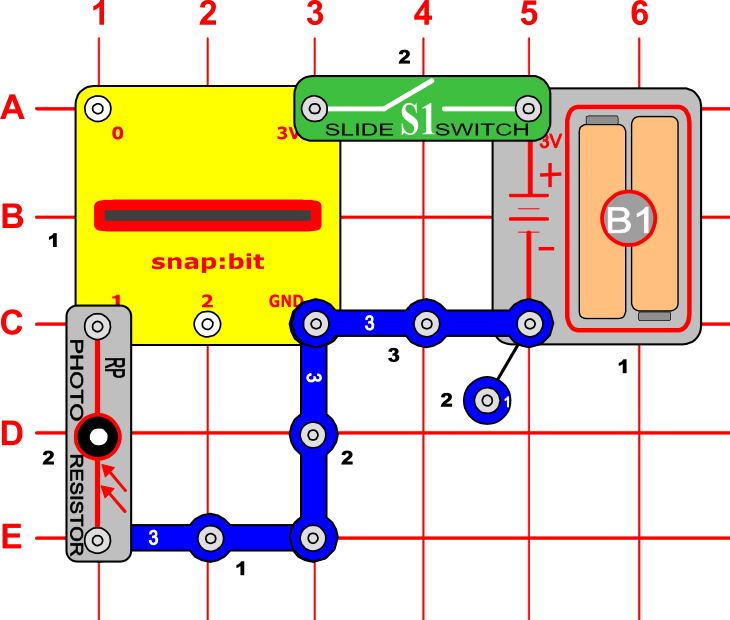