Use a TV remote control to the micro:bit to turn on and off the DC Motor of Snap Circuits.

Use a TV remote control to the micro:bit to turn on and off the DC Motor of Snap Circuits. 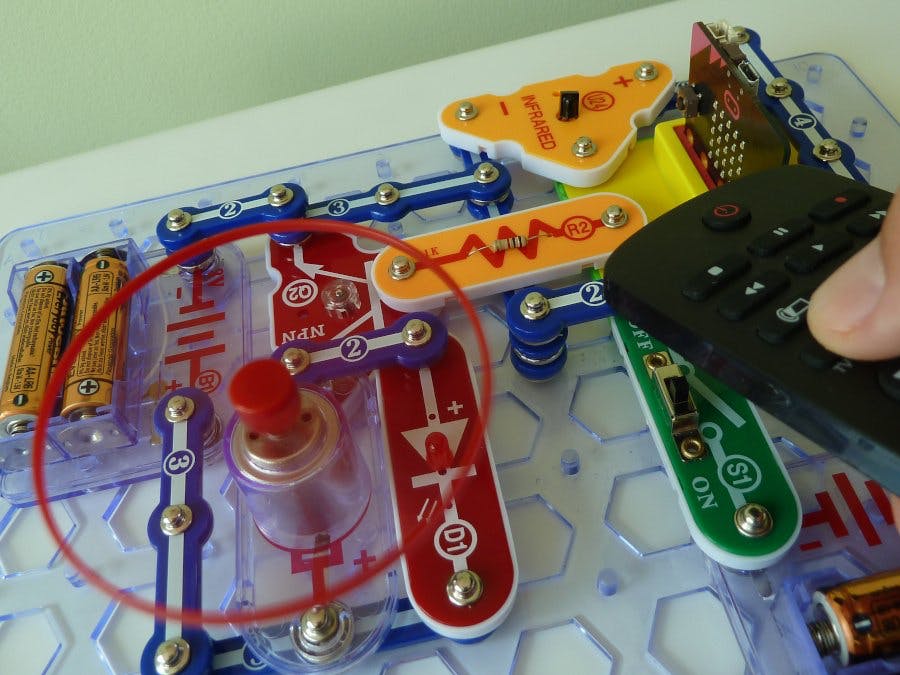 This project demonstrates how to use a standard TV remote control to send an infrared (IR) signal to the BBC micro:bit to turn on and off the DC Motor (M1) of Snap Circuits.

This project builds on top of what we learned in the Connect Infrared Receiver and the Control DC Motor With Transistor projects.

You can build the code yourself in the MakeCode Editor. You will find the "analog read pin" and "digital write pin" blocks under the Advanced > Pins section.

When you close the slide switch (S1), the Battery Holder (B1) at the bottom of the diagram powers the snap:bit through the 3V snap, and the micro:bit turns on. In parallel, the batteries power the Infrared Receiver (U24) through its positive (+) terminal.

At this moment no current flows from pin P2 of the micro:bit to the base of the NPN transistor (Q2). Therefore, no current flows between the collector and the emitter of the transistor, so that part of the circuit is open and the DC Motor (M1) is off.

Next, the “forever” loop starts. It repeatedly reads the analog input from pin P1 where the infrared receiver is connected to.

If you push a button on the IR remote control, it will emit an infrared wave signal to the Infrared Receiver (U24). The receiver will detect it and the analog read from pin P1 will return a low value (< 100).

In response to the received IR signal, the micro:bit will change the value of the "on" variable from "0" to "1" or vice versa.

This closes the circuit between the P2 and GND pins and a small current starts flowing to the base of the NPN transistor, through the transistor's emitter, the GND pin of the snap:bit, and back to the negative terminal of the Battery Holder (B1) at the bottom of the diagram.

After writing to pin P2, the micro:bit pauses the "forever" loop for 1 second. This is necessary because remote controls send the IR signal in pulses that encode a specific pattern for each button. See the Connect Infrared Receiver project for details. By pausing the loop for 1 second, the micro:bit will discard the remainder of the IR pulse. If it does not to that, it may falsely assume that another button was pushed on the remote control, which would stop the DC motor.

If you push a button again on the remote control, a new IR signal is sent to the infrared receiver. The micro:bit detects it in the "forever" loop and switches the value of the "on" variable from 1 to 0. It now writes a digital 0 signal to pin P2. This opens the circuit between the P2 and GND pins and the current stops flowing to the base of the transistor. This stops the current flow from the collector to the emitter of the transistor and the DC motor turns off.

We remind that we use the Red LED (D1) here as a flyback diode to protect the transistor from damage when the DC motor is turned off. You can learn more about this in the Control DC Motor With Transistor project.

Why are 2 battery holders used?

You may have noticed that we have 2 Battery Holders (B1) in this project. The one at the bottom powers the micro:bit and the Infrared Receiver (U24). The other on the left powers the DC Motor (M1).

While the DC motor is running it drives a lot of current from the batteries. This does not leave enough current to the infrared receiver and it may not work properly. This means that if we used a single battery holder for everything, we would be able to start the DC motor, but may not be able to stop it.

This is why we have separate power supply just for the DC motor. You will notice that even with this optimization you need get the remote control closer to the infrared receiver to be able to turn the DC motor off. 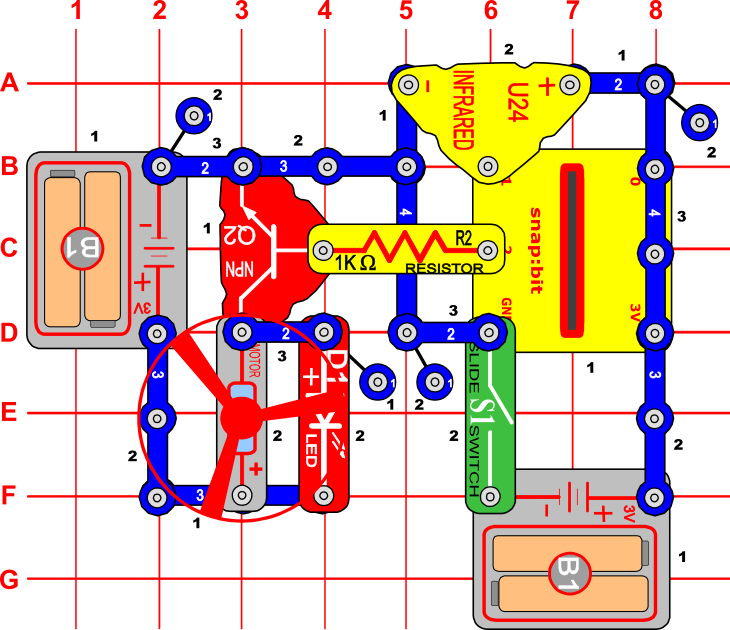